As an author, I am always being asked about my life, who I am and why I started writing. 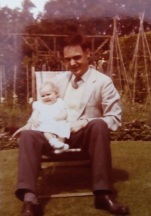 Where was I born? I was born in Perivale Maternity Hospital, Ealing in West London. (Sadly this institution which delivered thousands of babies was flattened and re-designated for housing, as births moved into mainstream hospitals.

Mum would recall how it was the coldest Winter last century and dad arrived, as did many excited fathers, to be greeted by the matron who scolded them, made them take off their overcoats and jump up and down until they had warmed themselves up, before allowing them through to wives and newborns.

I grew up happily in Ealing, went to Wood End

Primary School, followed by Woodend Girls school, before someone had the bright idea of changing its name! Then we moved within Ealing to another suburb and I attended North Ealing Primary. In fact, my father and Aunt, Grandmother and Great Aunt had all attended this school, there I blossomed into a long lanky child who was nicknamed ‘Spoon,’ and became a defender of other odd-ball because I was head and shoulders taller than the bullies.

High School consisted of endless happy days. My peers caught up with me height-wise and as an ex-grammar school, (gosh I seemed to be a child whose surrounding formed change of the times,) anyway I loved high school. I played French horn and eventually went to Ealing Tech Saturday Music School, I remember my horn teacher was Lyn Morgan, a Welshman in the air force. the various choirs, orchestras, wind bands and wind ensembles I belonged to became quite good, culminating in two performances at the Albert Hall and one at the Festival Hall – the latter a competition where we came 2nd. I recall my father reading from the Times that had we had a stronger string section we would have come first. I don’t recall we even knew it was a competition, we just thought it was another concert – we performed a lot of concerts!

Anyway, at highschool, I loved sport, but with glasses that never seemed to want to stay on my face I ended up refereeing netball more than playing (actually I was quite good at it and refereed whilst at school for age groups 3 years my senior as well and 3 years my junior.)

But my love of sports and music resulted only in joining dad at the local Wasps rugby matches (I think he had secretly hope for a son first,) though I developed a passion for cricket and rugby that extend even to today.

Life in my late teens through to my early 30’s was filled with Scouting. I devoted countless evenings and weekends to cubs and scout, ending with unarguably the best scout troops in the Greenford District for many years. I had something to prove you see, after ‘uncle Ted’ remarked, “Oh my god it’s a bl**dy woman.” as I entered the Scout HQ. It took less than 3 months for my lads to win their first trophy after I told them about it, and within the year we had won 12/13 trophies which we held for the next 7 years, – that darn swimming trophy always just alluded us, ha, ha, ha.

After marrying and moving to Sri Lanka I was widowed within four years, but determined to give back to a community who had given me so much, so, I remained in the country and helped set up new libraries and English Schools (to develop and promote spoken English.)

I ran to the lounge to see the results of the Tsunami in my beloved Sri Lanka. I immediately called my nephew Rukshan Jayawardene and asked what I could do? 5 days earlier we had been staying in Yala National Park. I waved to friends as they entered and we left, and that was the last time she saw them, as the wave took their lives. Determined to help, I turned my mother’s lounge and most of her house as well as a neighbour’s double garage into a Tsunami collection point. I had stayed on in the UK for a month after the Tsunami and been helped by mum’s neighbours, golfing acquaintances, sponsors and scout to collect all manner of things needy things for a people who had literally had their homes and lives torn away from them. Everything was packed into a 40ft trailer and sent to Sri Lanka, and then over the next 6 months distributed to the needy in A-bay, with the help of friends foreign and local.

I then spent the next 2 years in Aragum Bay helping villagers where I could. Sewing machine and material to set up small cottage industries. Helping to rebuild a Montessori on higher ground – a place of safety where the children will always run to should another Tsunami ever hit. Providing hundreds of books to set up a new library at the school, and helping to rebuild a small B&B. I chose ‘my Sri Lankan family,’ as they were a mixed marriage (Singhalese and Tamil.) and one in war-torn Sri Lanka that no-one else wanted to help.

I dodged mined-lined narrow roads, as I drove between Kandy in the Central Highlands of the Island, and home for nearly 10 years, to Arugam Bay on the Tamil Tiger-held East Coast. Was it dangerous? Yes, probably, but I didn’t think about that at the time. I just did it.

By mid-2006 I was all but burnt out. I had achieved much, helped ‘my family’ build a business that would sustain them into the future, co-rebuild a Montisourri with my friend Tim and help bring books into the village to start a new library. But now it was time to move on.

I spent almost a year in the Middle East (UAE and Bahrain) teaching KG2 graders before moving to South Africa where I started to write, fell in love and remain to this day living in Johannesburg with my four dogs. I believe I have established myself withing the literary Indies community and regularly organise meeting and book fairs for same. But my real passion is taking Polly into schools to talk about bullying, or Toucane to talk about Stranger Danger or Keeping our world clean. 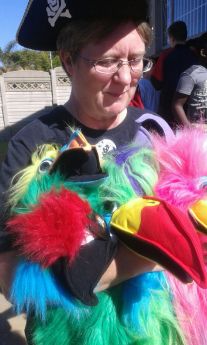 It’s what I have always been good at really – talking to children. My books and puppet are just another way to do this and get the message over. I love my life and what I do and I must be one of the luckiest people I know to be able to follow my passion in this regard.

So, there you have it. A bit about who I am. If you have any questions you would like to ask?

4 thoughts on “Who is Jann Weeratunga?”