Toucane and Jann visited The Ridge Prep School, and oh my gosh, it was like walking into Hogwarts.

The School is 100 years old this year and has maintained that sense of tradition which just oozes from its buildings. Indeed, it was a privilege to be invited into the school during such a special year.

Toucane and Jann explained how it is COOL to have friends who are different from us, and how we must stick up for them when our friends are ugly to them. Especially when someone is new to our school. #ToucaneIsDifferent

They then went on to talk about when Toucane caught humans throwing litter on the beach, and how upset he got.

Jann then taught the boys a song about picking up rubbish/litter and throwing it in the bin. #ToucaneAndTheRubbishRangers

So, all the boys went away, keen to become Rubbish Rangers.

Jann Will be back at The Ridge with Polly and her Piralympics Series in August, chatting to grade 3-5’s.

Toucane flies out to schools. 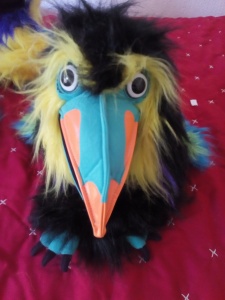 I think Polly may be getting a wee bit jealous, but fear not ma wee pet coz there will be a new Polly book out soon – watch this space.

Toucane is becoming popular in primary schools as I prepare for yet another visit on Monday.

Toucane will be talking about Stranger Danger on Monday in Dungarvan and bringing along the rest of the flock and his books.

If you are interested in a visit from Toucane 4-8 year-olds, or Polly 8-11 year olds just contact me, I visit all of Gauteng and will be touring East London and the Eastern Cape again later in the year, and am hoping to visit Durban this year as well.

So if you are a school, teacher or parent, you are welcome to contact me janspicssa@gmail.com

After touring the Eastern Cape last April, I was lucky enough to be visiting Port Elizabeth and met up with the owner of Fogarty’s Book Shop. 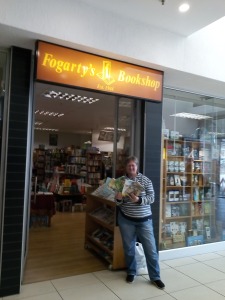 My books are now available at Fogarty’s Book Shop in Walmer Mall. So if you are looking for middle-grade books for your youngsters for the Christmas Holiday’s, why not pop in and take a look at my Polly’s Piralympics Series. Loads of fun, interactive pages to draw on and get involved with Polly and the crew.

Or for younger readers there are my colouring-in story books the Toucane Series, teaching about not throwing down rubbish, how a friend is a friend no matter their colour and stranger danger. 4-8 years.

Toucane has arrived at Skoobs Theatre of Books, in Monte Casino, Johannesburg. Just ask Deborah Du Plooy, or at the payment counter and they will point the way, so if you are looking for a Children’s Colouring Book plus a whole lot more check it out. There is also a rap for the kids to learn and how to make your own rubbish/trash bin, which can be made at home or as a competition at school.

So, Parents, Teachers get down to Skoobs and watch out because the second Toucane book – Toucane is Different – is hard on its heels and will be available as soon as the print has dried.

Thank you to everyone who has taken the time to not only read my books but also to review them too. I know from a few of you that you read them with your kids and guess the reviews are actually from them.

I am super HAPPY with how my books have been received to date and can’t wait to also get the feedback from the schools who are using it as their setwork books. Well done to Assumption Convent Primary School for being so fast off the mark and going with it this year. I had a brilliant day with your grade 3’s and am super excited to hear how it went in the classroom.

If your school would like Polly and myself to visit and chat to your kids about bullying, being different, anti-drugs or a host of other topics just let me know at janspicssa@gmail.com

Yesterday was Polly’s Day at Assumption Primary School. That’s right, Jann definitely took a back seat as Polly flew into Assumption Convent Primary School to launch How Polly Became a Pirate to the grade 3 learners. It is their setwork book for this term.

Prior to meeting with the pupils, Jann explained the elements within this book that could be used by the teachers in their life skills lessons – being scared (alone and away from her family); animal trafficking as Polly gets stolen from her nest and sent overseas; prejudices of others that influence us before we make up our own minds (Polly should be afraid of lions because her parents are); putting others before ourselves (Polly helps the other animals escape, even though she has to remain behind); being bullied by the horrible boys in the pet shop; having only one eye like Captain Hake, but it doesn’t stop them doing anything and they are accepted by the pirate crew.

After that, it was all just Polly.

“How does she talk?”

Were just some of the comments as she made her way around the class to greet each pupil. It never ceases to amaze me how they want her to be real, even though they clearly know she is just a puppet. Some wanted to pet her, whilst others were a bit wary, but she had promised to be good and not bite anyone, well, that was until one of the girls decided to put her finger in Polly’s mouth. She just couldn’t help it she said afterwards. Well, do you go around putting your finger in other peoples mouths she asked?

Then Polly sat in Jann’s Pirate Hat and dozed as Jann read the first chapter of her book to the girls. I just love watching their faces as I read, and then the comments afterwards… I JUST LOVE BEING AN AUTHOR!